My friends and I successfully climbed Mt. Fuji from the bottom (Sengen Shrine) on July 26th, 2017.  It was mentioned that we start from the bottom over a few bottles of wine and initially I was against it.  However, what won me over was when my friend Brandon told me that this was the historical route the pilgrims used to take before cars were invented and since I love history that was what I needed to hear.  99% of hikers start from the 5th station which is in the middle of the mountain and where the road ends.  There are a lot of shops, restaurants and tourist stuff at the 5th station but then you need to walk about half an hour to get to the actual trail.

I had climbed Mt. Fuji in my 20s from the 5th station but we made the mistake of not reserving a hut and had to spend a very cold night outside while waiting for the sunrise.  I made the mistake of changing my sweat soaked t-shirt at the summit without shelter; the wind blew right through me and I had violent shivers for a couple of hours which really took the energy right out of me.  Here is a post I wrote about the experience:

There are plenty of posts about climbing from the 5th station but not many from Sengen Shrine so hopefully those wanting to climb from the bottom will find this post helpful.

In short, it took us about 11 hours with one big one hour break and a few smaller breaks.  We began at 4:00 AM from Sengen and it also took us a little while to find the right path.  My backpack weight about 35 pounds with about 4 liters of water and many Cliff Bar trail bars.  A camelback is highly recommended since you can take little, but more frequent sips of water on the way up.  The two main problems with climbing are altitude sickness and weather.  Drinking plenty of water will help with any altitude sickness and hopefully the weather will be nice.  I didn’t experience any altitude sickness and luckily the weather was tolerable even though the forecast called for storms.  We were determined to do it anyway and luckily didn’t get caught in any rain.

Here are my maps from Strava and Google tracking.  My carrier is T-Mobile which should be your carrier of choice if you travel overseas as they do not give you any hassle or charge exorbitant amounts of money to use the phone overseas.  Data and messaging are free and calls cost $0.20 a minute.  However, when climbing you’ll frequently be in areas of no service and this really screwed up the Google tracking as you will see since it didn’t know where I was sometimes.  Strava tracking did a much better job.  I put my phone on battery saver and also had two additional battery packs which really came in handy.  Mt. Fuji does have wifi but these are available only at the station huts.  You don’t need to buy a card or anything like that as some websites say, you can easily register and connect to wifi for free at the huts.

As you can see on Strava it didn’t do a spectacular job either as it only has me moving for an hour and 53 minutes.  The map comes in handy though as it shows the true route unlike Google.  Strava link:  https://www.strava.com/activities/1100249182

So starting from Sengen the first building you see is the first station called Nakano-Chaya.

There is nobody there and we only saw one guy taking a very deep sleep on a bench.  In fact, we only saw about five people from Sengen to the fifth station.  In the beginning the path is through forest which is pretty relaxing.  There is a long slog on paved road which isn’t much fun because it is harder on the feet. 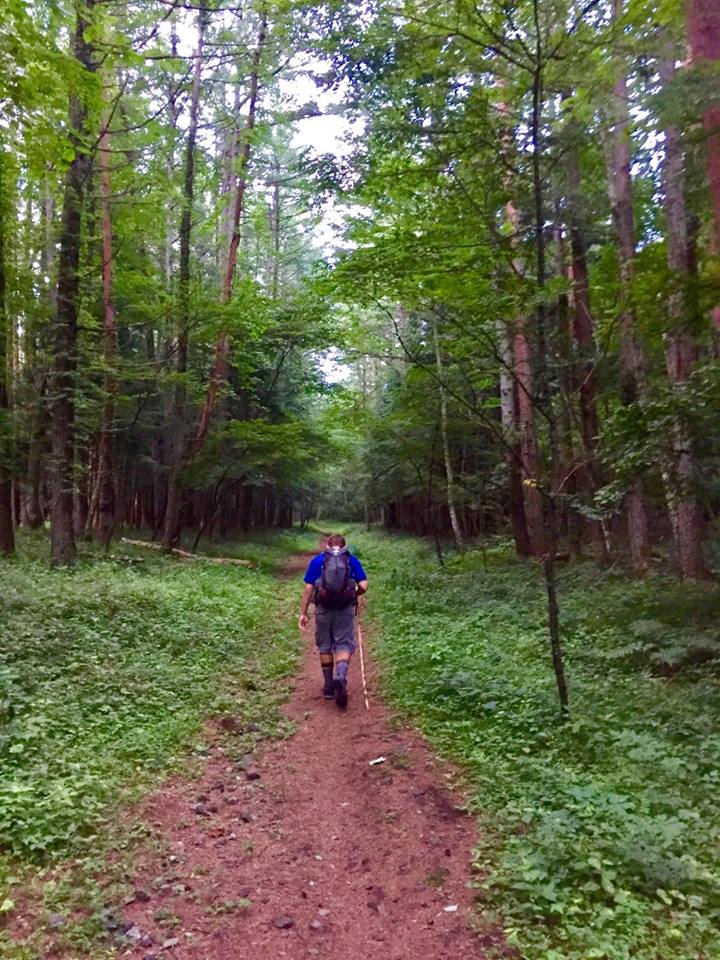 The paved portion goes pretty much until the old 5th station.  As you can see this building is no longer in use but one of my Japanese buddies remembers when it was in use and visited when he was a young boy.

Next you come to the first of two ‘5th stations.’  It is the first because it is actually about 20 minutes below the 5th station all the tourists use.  I wonder how they stay open since they don’t see that much traffic?  In any case, they do offer a stamp and since we had been hiking for about 4-5 hours we stopped for a meal.

Next it was up the upper portion of the mountain along with a lot of starting from the new 5th station.  I recommend hiking in the daytime because there is much less traffic than at night when a lot of people begin their ascent to catch the sunrise.  You are also able to see scenery if the weather is clear, which unfortunately for us it was not.  I didn’t take many pictures from the 5th to 8th stations as I really just wanted to get to the top of the mountain as quickly as possible.  I only stopped at each station for my stamp and moved along.

Towards the top you’ll start hiking more slowly so don’t let the distance fool you.  It will be slow going due to the lack of oxygen and you’ll need to take many small pauses to catch your breath.  So even if you go quickly at the bottom the last parts will take much longer.

Finally we reached the summit and well before closing time at the huts.

We reserved a hut for the night which is a must or otherwise you’ll spend a long, cold night outside which isn’t much fun at all.  We celebrated by drinking Yamazaki whiskey, a beer and a nice meal of curry rice.  However, none in our group slept very well due to the extreme exhaustion or altitude or both.

In the morning we got good seats for the sunrise but unfortunately due to cloud cover there was no sunrise.  🙁  The dawn was absolutely spectacular however and it was surreal being above the clouds.

The next morning we hiked around the crater but unfortunately it was very foggy until we had completed it.  Hiking around the crater is also recommended because there is a post office from which you can send a post card and another shrine for another stamp on the summit.

As I mentioned the fog gave way after our hike for which we were grateful.  Here is the crater of Mt. Fuji. 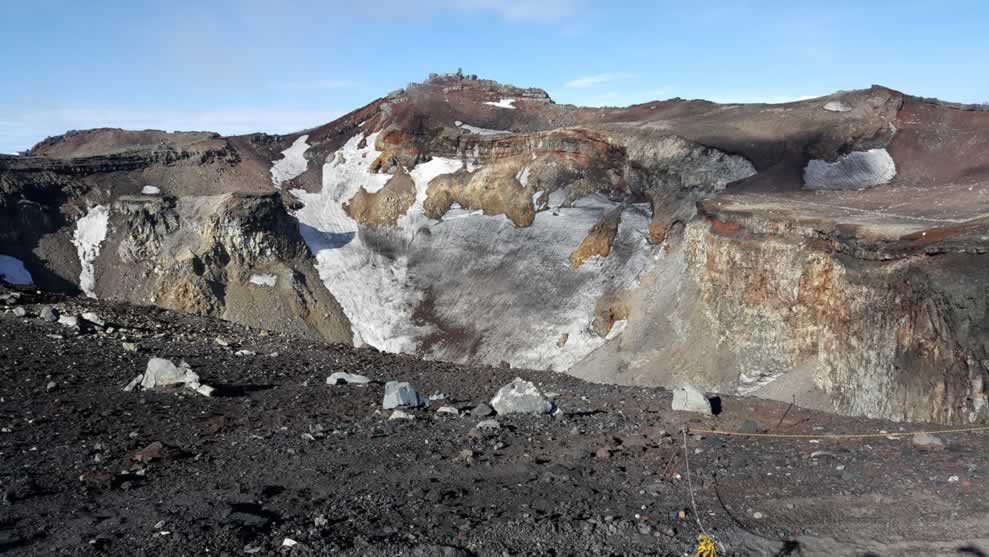 Then it was back down the mountain.  Since the fog had cleared we were able to get two great pictures at the summit right before we started the 5 hour descent. 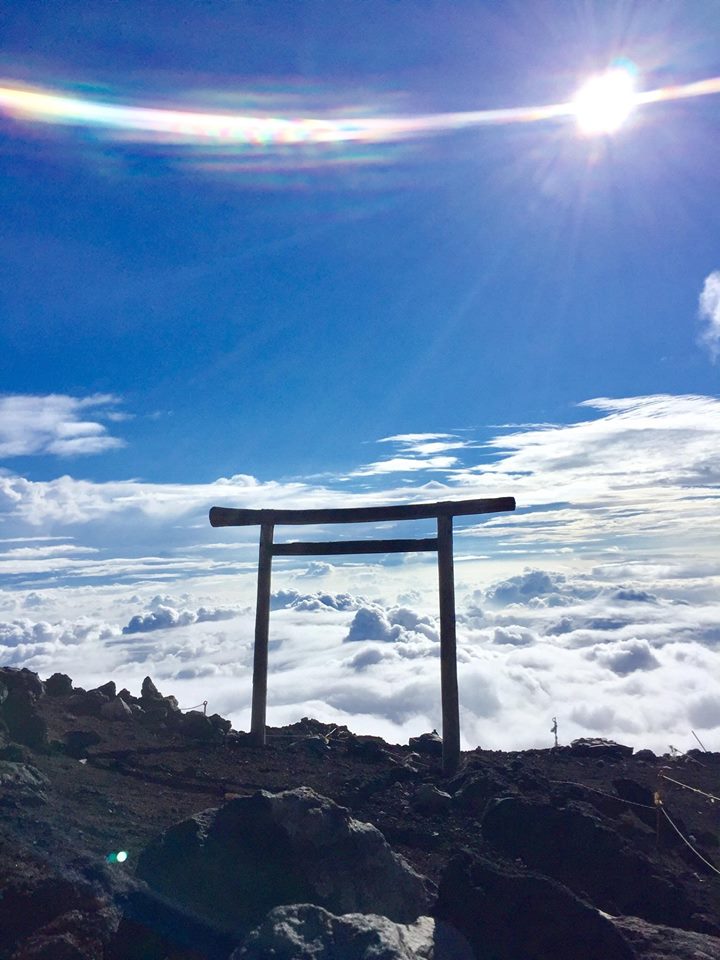 Heading back down the mountain isn’t much fun because it takes seemingly forever and just keeps going on and on for about five hours.  Unfortunately I had also run out of water and so had to pay 500 yen for a small bottle.  There also aren’t any places to refill the water or even buy it on the way back down so be prepared.

As you can see the path back down is also pretty desolate.  I didn’t take many pictures here either as I just wanted to get down as quickly as possible and my batteries were pretty much exhausted.

All in all it was a wonderful experience – although very hard! – but I was able to find an inner stamina that I didn’t know I had.  Perhaps I had some help from my ancestor in-laws who I told I was climbing the mountain and asked for their help.  No altitude sickness, a quick climb and plenty of supplies made for a great hike and one we’ll talk about over many more bottles of wine as the years go by.