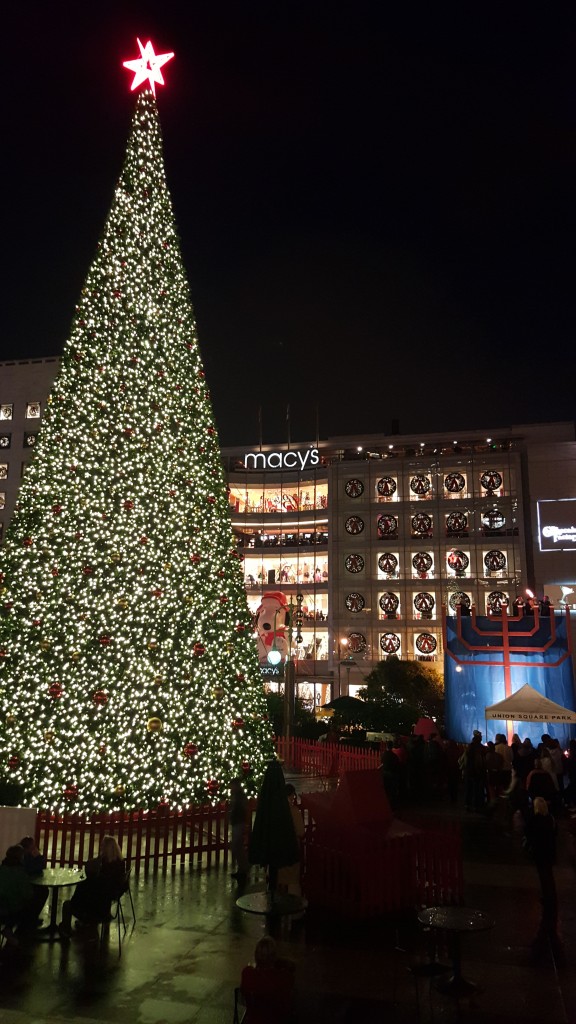 I attended the Bay Area Business Travel Association’s annual holiday Gala on Thursday.  When there is an event late at night in the city I like to get into town a few hours early and walk through the neighborhood.  I lived close to Union Square for about five years and the gala being close-by I took the opportunity for a time to reminisce a little.  Union Square is always a magical place around Christmas due to the decorations such as the enormous tree in the picture above, Macy’s always does a good job and the hotels have very nice displays.  I also like to sit and watch all the shoppers and tourists rush here and there and everyone seems to be in a happy mood.

There is a certain energy to San Francisco around the holidays, one that is missed when you move to the suburbs and find yourself staying mostly indoors instead of venturing out to escape the claustrophobic environment of a studio apartment.  When I took this picture I was lucky enough to catch the lighting of the monorah.  I learned from the Rabbi’s speech a good bit about Union Square and its connection with Jewish people since World War Two that I had not known before.

After taking this picture I then walked over to the Hilton for the gala.  The crowd seemed a little smaller than last year but it could be because the room was bigger.  In the past one could find great deals on airline tickets through the silent raffle they hold but this year the airlines were completely missing from the prizes.  It seems they may have gotten their capacity down to a size where they can make great money by restricting inventory and thus have less seats to give away for prizes.  There were plenty of hotel stays but I for one would rather spend the night in the comfort of my own home rather than in a hotel.  Plus, once you know a number of representatives in the industry it isn’t a problem to give them a call to see what discounts might be available for a travel industry colleague.